The Arts covers a wide range of activities in the college and calls on the expertise of many of our staff. The aim of the Arts here at St Andrew's College is to contribute to the education of the whole student.  It is our belief that participation in the Arts makes for a fully rounded individual. 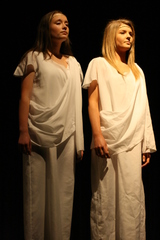 Chief among the Arts activities are; One-Act Drama, The Wine-Dark Sea, The Music and Dance Festival, Literature Aloud and the College Musical which occurs every two years.

We host The One-Act Drama Festival every February and in recent years have enjoyed considerable success. Several of the recent plays we have entered into the competition have been written by Mr Robert McDermott and directed by Mr William Mansfield.

The Wine-Dark Sea is the school literary and creative writing magazine. Now in its twelfth year it was originally the brainchild of Ms Audrey Talbot. It is currently edited by Mr Robert McDermott and is a showcase of the writing talents of students ranging from the youngest in the Junior School to the Sixth Year students in the Senior School.

The Music and Dance Festival, Literature Aloud and the School Production further showcase and develop the great variety of creative talents that the students of St Andrew's have in abundance, all of which would not be out of place in professional circles.