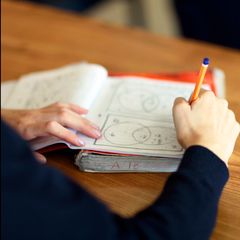 The school day begins with registration from 8.45am - 8.55am in the students' form room.   On one day a week the year group has an Assembly taken by the Year Head or the Deputy Principal responsible for that year group.

Students then have two classes and break for lunch at 1.15pm. On Wednesdays students are free to go home or go to sports training/matches at this time.

Afternoon school commences at 1.55pm and the academic day ends at 3.55pm.