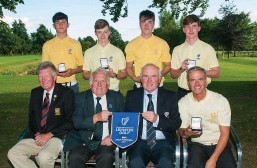 Congratulations to Luka Keyes, Robert Halpenny and Alex Wallace, three of the four players on Dun Laoghaire Golf Club's team that beat Woodenbridge to claim the Leinster title in the Irish Junior Foursomes.  The team now goes on to represent Leinster in the All-Ireland final at Rockmount near Belfast on Tuesday 22 August.  They will be joined at Rockmount by Athenry, Ballybunion and Bangor.  We wish them good luck in the final!